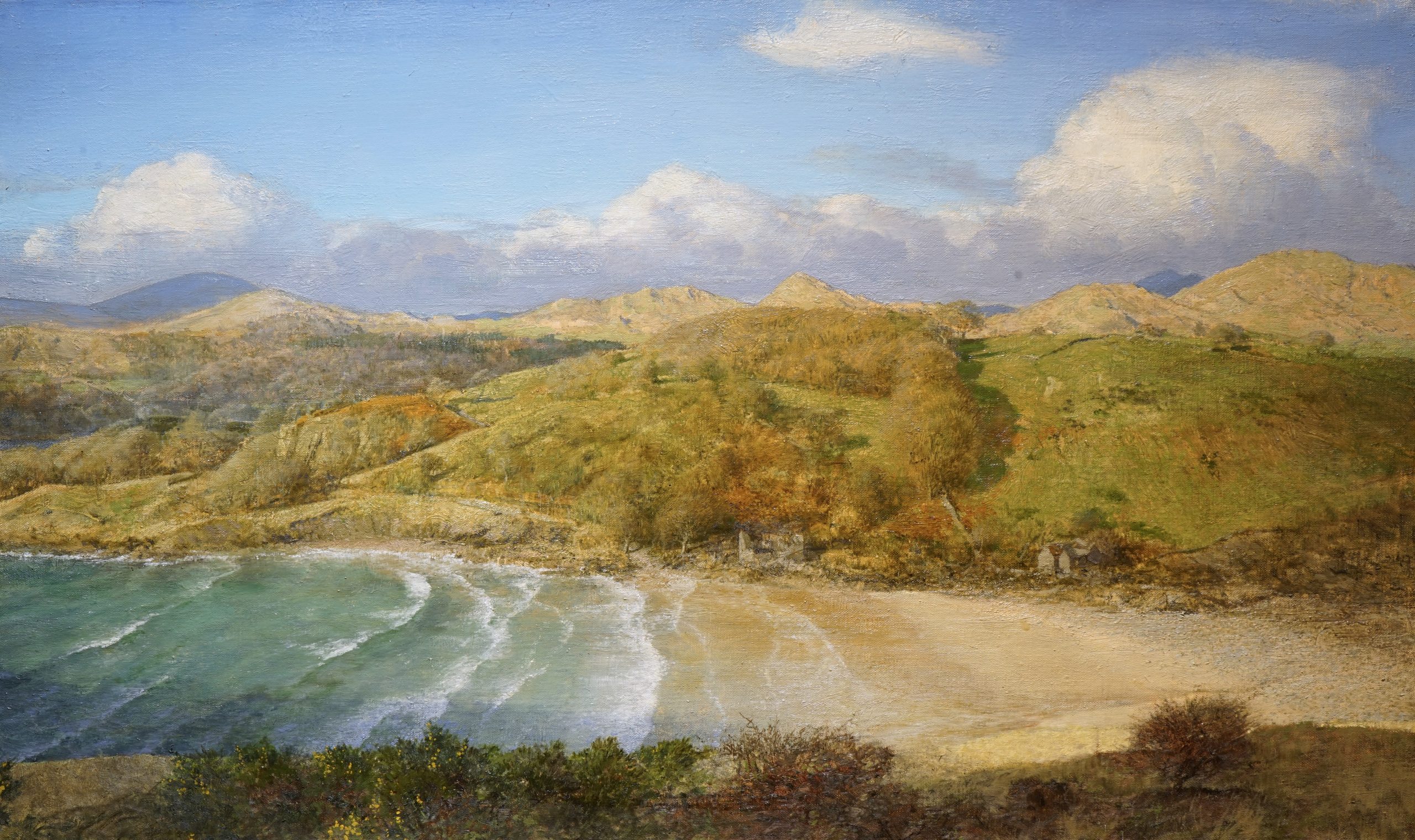 Brantwood is delighted to welcome back Martin with a new collection of his wonderfully evocative landscape paintings.

I didn’t choose to be a landscape painter. I wanted to keep away from it because, like many over the 20th century and beyond, I thought it to be old-fashioned, the preserve of amateurs. I had been a figure painter until art college which shook me up so much that it took a retreat into photography to metamorphosise me into the painter I am now. In photography, I recorded my solitary experiences, cycling the roads and lanes of Wessex. I became increasingly interested in the details but also the ordinary in the landscape. I recorded objects in their surroundings which would later make me analyse why I was drawn to such things. There was a lot of nostalgia, often a criticism, especially of the British and something I believed I couldn’t talk about in art college. We were supposed to always be modernists. I soon realised that my curiosity with a great deal I was seeing stemmed from early childhood. As the years have passed, I have come to realise that the immediate now is the only thing we can have a chance of being certain. The future will come but it doesn’t exist just as the passed doesn’t. The past is memory and would remain entirely that if we didn’t have modern ways of recording some of it. Yet the past is all we have to use; it is what we base our actions now, upon, and what we have experienced shapes us all.

Returning to painting, I emerged warily with modest paintings, expecting to be roasted by my tutors; the opposite was the case. I was encouraged to believe that I was producing something little seen, genuinely felt and personal; invented landscapes filled with details and perhaps, ultimately, meaning which were a true poetic expression of all my thoughts, ideas, concepts, emotions and atmospheres, all interlinked and difficult, as I find even now, writing this, to easily sum up. It is a difficult territory in which to work. Landscape painting is still seen as peripheral, outdated, the stuff of amateurs and unimportant in the international language of contemporary art and of important issues.

WALKING FROM HOME is a growing body of paintings featuring ‘real’ and invented or re-invented landscapes. I have spent 35 years producing increasingly convincing landscapes which are entirely fictional, just as a novelist invents and like a novel, they are rooted in reality, obeying the science of matter. Recently my growing love of my adopted home (I have lived in the actual Lake District National Park for 24 years, Cumbria for 36 years) and an unexpected interested in painting real landscapes or elements or parts of real landscapes, has resulted in the paintings of the last 18 months. These landscapes are not the obvious tourist views, though they could be if I wanted to, but are places which I have grown to know well. Through walking, I have gradually pieced together, like a jigsaw puzzle, the landscape of the south of The Lakelands, especially of the Winster Valley, which I can walk into from home in Bowness on Windermere. I have long been introspective, enjoying, like Constable, the qualities of my immediate surroundings. I can imagine distant places but don’t have the wanderlust to visit them. For many years I have wished the greater public to get to know and learn to enjoy their own places too, not resorting to the ‘right’ to journey, as privileged Westerners, on polluting, interfering journeys. Now that situation has been forced upon us.

THE SEAS ARE RISING started as a rather superficial, vanity project – to combine the exquisite landscape of the Lake District with the exquisite seas of Cornwall or Pembrokeshire. It is an impossible situation of course. For it to happen would mean Ireland would have to disappear. The seas would have to rise too but as we know, this is happening and will continue to do so. It is a growing contemporary concern. There are, in my view, some very demanding and somewhat hysterical voices and I have my own, logical reasons to not belong to this camp. I am not running around shouting ”The Seas Are Rising!!”. However, painting the three works seen on the walls here left me with a very uneasy feeling of loss and dereliction, realising that I didn’t really want to witness the change to the landscape/seascape of which I have grown so fond. Climate change doesn’t just mean the rise of the seas but the disappearance of flora and fauna which we all hold dear. I worked tropical palms into the paintings but I know that for this to happen would really mean the end of our deciduous trees and even green fields.

The paintings are nonetheless successful. My works have been unpeopled since that metamorphosis at art college; this past year has brought an extra significance to those sometimes, lonely places. Otherwise busy places, thronging with human life have been left quite empty, quieter than at any time since the beginning  of the 19th century and probably quieter. Not only are they visually, formally, technically successful but now have added significance because of contemporary events.

“I think his painting is superb – the images a striking fusion of arresting myth and exquisite landscape – he gives great picture!”

Charter of the Forest, Usher Art Gallery and Collection, Lincoln

Outside the Glass, Theatre by The Lake, Keswick, Cumbria

Up Front Gallery, Hutton in the Forest, Cumbria

Up Front Gallery Hutton in the Forest Cumbria