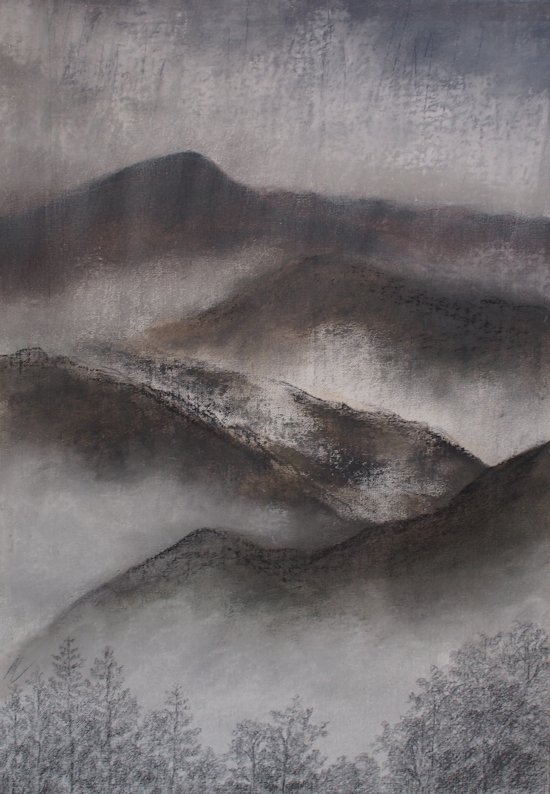 A major solo and 10th anniversary exhibition by Daniel Cooper

An Echo in the Sky is Daniel Cooper’s brand new major solo exhibition, and comes at the time he celebrates a decade in a career as a professional artist living and working in Cumbria. The collection of original work describes the place where it all started for Cooper: Brantwood, the former home of John Ruskin, on the East side of Coniston Water; and it is also the host for this new show. After extensive observations from Brantwood Estate during his years of practice, including an annual residency, Cooper has made a personal and emotional decision to revisit the origin of his practice, where ‘feeling for place’ became the form of communication from all future work. Cooper has also included new works of other regions and fell ranges from around The Lakes, showing the breadth of exploration he has undertaken over the past decade.

“I want to depict how the sky, light and the place that surrounds me make me feel. There is beauty in all corners of nature, and I want to compose it multiple times in effort to represent the dramatic and sublime spaces we live in. Our weather is constantly changing, and it always feels different, and in many ways, the weather interprets the land it unites with. The land for me is the stage to stand, contemplate, walk and observe upon.”

Cooper’s palette of greys and subtle colour from various mixed media is dominated by his defining media – charcoal, in particular, burnt on the Brantwood Estate. His distinctive style of atmospheric skies and landscape from around The Lake District is well known and collected by private and commercial collections worldwide. An Echo in the Sky goes further in his efforts to scale his work larger to describe the dominant natural architecture surrounding Coniston Water. Cooper has also introduced his new works made using pyrography – burning into the paper to create his drawings.

“Like an echo, but in this case, something observed, the landscapes of Cumbria repeatedly fuel my need to express myself visually. A fell summit is both an end and a beginning to a journey, and I believe there are infinite ways to respond when you look up”.

Award winning local artist Daniel Cooper is one of very few full-time artists living and working in Cumbria today, and has held over thirty solo shows and countless group shows dedicated almost exclusively in this county. He has exhibited with or alongside works by notable artists such as Percy Kelly, Samuel Prout (John Ruskin’s teacher), Beatrix Potter and shown concurrently with a special exhibition of works by JMW Turner at Brantwood. Along with celebrity collectors, Cooper’s work has appeared on television and national publications including The Great Outdoors and TATLER magazine. During the Covid pandemic lockdown, Cooper was one of the first British artists to host an online-exclusive solo exhibition, on his website, in spring of 2020. Today, Cooper exhibits permanently in galleries across The Lake District and produces a number of private commissions each year.

An Echo in the Sky is held at The Severn Studio at Brantwood and begins with its preview where you can meet and talk to the artist on Saturday 13th August 2022 from 12 noon.

Please note that access to The Severn Studio is limited due to steep outside steps.

An Echo in the Sky is dedicated to my late dear friend, Kate, who helped me in life to progress as the artist I am today. – Daniel Cooper