We have been so proud to announce the arrival of our new fab comic Bloke’s Progress, the combined version of three fabulous comics written by Kevin Jackson and illustrated by Hunt Emerson.   Both attended the Lakes International Comic Art Festival in October (with, of course, Bloke’s Progress).

During the Festival, it was announced that Hunt Emerson was the winner of the Sergio Aragonés International Award for Excellence in Comic Art for 2018.

Hunt, who is highly regarded internationally for his work as a graphic novelist, and as a cartoonist for a variety of magazines including Fortean Times and Beano, was announced as winner at the opening ceremony of the Lakes International Comic Art Festival in Kendal, Cumbria.

The award was established last year by The National Cartoonists Society, in partnership with the Lakes International Comic Art Festival. The honour is presented annually to an exceptional comic artist, animator, or cartoonist.

Hunt Emerson, who has drawn cartoons and comic strips since the early 1970s and whose award-winning work is the focus of an exhibition in Kendal right now until the beginning of November.

Hunt has published around 30 comic books and albums, mainly with Knockabout Comics, including Lady Chatterley’s Lover, The Rime of the Ancient Mariner, Casanova’s Last Stand and Dante’s Inferno. His latest books are Calculus Cat, a hilarious collection of stories about The Cat That Hates Television, Hot Jazz, a collection of jazz-flavoured comics featuring Max Zillion and his saxophone Alto Ego, and Bloke’s Progress, a graphic novel based on the unlikely subject of Victorian art critic and philosopher John Ruskin.

In 2000 Hunt was chosen for inclusion in the exhibition The 75 Grand Masters of European Comic Art by the Bibliotheque Nationale de France and the CNBDI, Angouleme.

Hunt has been given several comics industry awards, including Strip Cartoonist of the Year, and has been the guest of comics and cartoon festivals around the world.

Sergio Aragonés, congratulating Hunt by video message from California, commented: “Hunt is probably one of the great cartoonists of our generation… I’m so proud he’s getting this Award – it is so, so well deserved.”

Julie Tait, Director of the Lakes Festival said: “Hunt Emerson’s work has delighted generations, from his early underground work and his creation Calculus Cat, through to his comics for Beano, Fortean Times and his incredible graphic novels, such as Bloke’s Progress, which has resonance locally for its focus on the work of philosopher John Ruskin, brought to life through a witty, modern interpretation.”

“His work is a delight and his enthusiasm for the comics form, and promoting it, remarkable.”

Copies of Bloke’s Progress are available to purchase from Brantwood bookshop at a price of £12.99.

Below is its story, in the words of Hunt:

“In 2005 and 2008 Kevin Jackson and myself, with the Ruskin Foundation, produced two comic books – HOW TO BE RICH and HOW TO SEE, both for limited distribution in the North West of England. There was always intended to be a third volume, HOW TO WORK, and now the Ruskin Foundation have the funds to realise it. Knockabout, with the Foundation, are publishing all three comics in one 120 page volume, BLOKE’S PROGRESS, to be released in April to coincide with a major exhibition entitled WORK at Brantwood (Cumbria), the Ruskin Foundation’s headquarters. 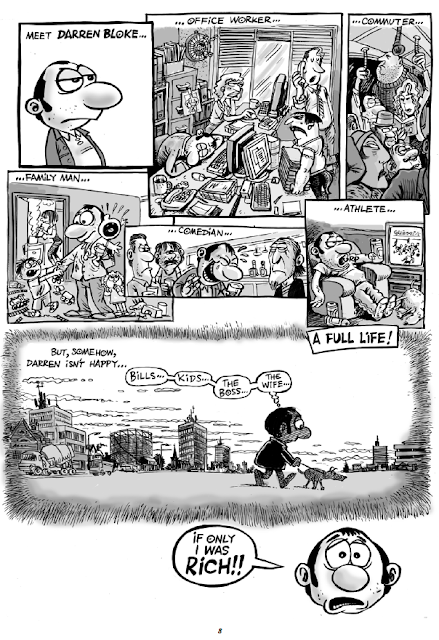 BLOKE’S PROGRESS is based on the works of Victorian critic, writer and social reformer John Ruskin (in his time possibly the most famous man in Britain), and were intended to try and introduce some of his ideas to young, modern readers. His work is largely unread today, being very dense and Victorian, but it is hard to over-estimate how influential he was in his time. His thinking led in time to such things as the National Trust, Art education for the masses, and ultimately the welfare state and the NHS. When members of the first Labour government were asked what influenced their philosophies a small minority said Karl Marx, while the majority cited John Ruskin, and it was often said that if a British working family had two books in their house they would be The Bible and Ruskin’s “Unto This Last” (the book that inspired our How To Be Rich). 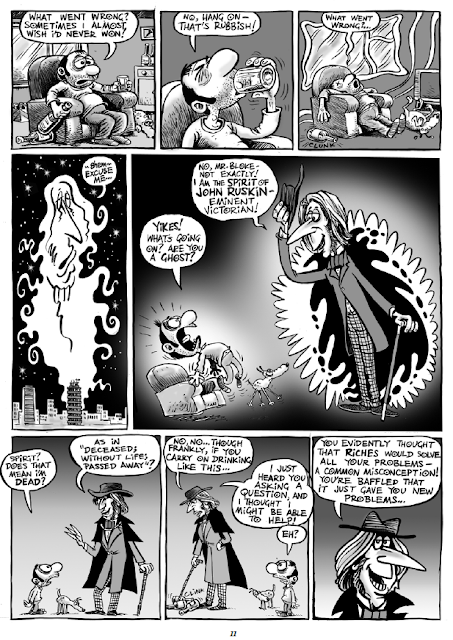 This all sounds very dry and intellectual, and hardly the stuff of comic books, but the book is far from that! It’s funny, wild and weird, it’s a romance and a psychedelic trip, and it has Skittle, one of the most loveable dogs in comics. And it contains some very interesting and radical ideas.

Darren Bloke is a hard-working stiff who’s life is changed and ruined by a lottery win. He squanders his windfall and winds up with nothing. The spirit of John Ruskin visits him, and takes him through a series of explorations of Money, Perception and Work that turn his life around and enable him to see the world through a much more positive, creative filter, and to learn to live as an honest human should.